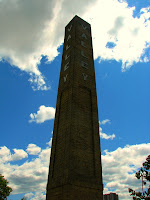 The Don Valley Brickworks is located within the Don Valley (duh) of Toronto, a location well outside our geographical area of operation in Central Ontario / Simcoe County. This sprawling former industrial site is where many GTA urban explorers conduct their first explorations and a good location to develop one's skills.

The last of four stacks still standing at the Brickworks.

This location, rated by experienced explorer's as 'easy' or 'moderate', has been visited hundreds of times and does provide fantastic industrial decay photographs. In fact, there are thousands of images available to view within personal websites and galleries.

A view of the pond to the rear of the building complex.

This brings us to the next point I wish to speak on to - the 'main-streaming' of a location such as this, from a sub-culture UrbEx mecca, to campy media backdrop. Or perhaps, in the words of livebait.tv, in a video podcast about the brickworks, 'where sub-culture meets pop-culture'. Exposure such as this garners quite an amount of attention.
The tag-monkeys and a$$-hat vandals have been busy here and left their mark.

I had dragged along a Barrie area UE novice and motorhead, Mr. Jack Morningwood for today's UrbEx misadventure. Upon arriving, we had noted a large crowd of volunteers from Home Depot working on another environmental improvement project for Evergreen, who are working on building an environmentally-based community centre (right) that "engages visitors in diverse experiences connected to nature".

Jack and I worked ourselves around the building only to find new plywood covering our planned POE. Further around, we were able to find another and nearly walked straight into a model photographic shoot!! Since we have big cajones, we then decided to walk straight in and try to avoid the area where the shoot was happening.

Unfortunately, within minutes, we were playing a high-adrenaline cat-and-mouse game with the on-site security who was with the shoot. The guard was unseen but we could always hear the shuffle of his feet just around the corner. This did not make for a pleasant exploration and we had left within ten minutes.

One of the few hasty photographs taken in the tunnel-kiln and dryer building.

In summary, what should have been a solid two hours of exploration through the site turned into a brief hurried foray in and straight out leaving us with only a paltry handful of pictures where others have hauled out dozens of spectacular breath-taking images (wahh!).

Another images through a door way into the kiln building. The security guard was just lurking off to the left when this was taken.

Another quick shot of a storage vessel in the Sand-Lime storage building originally where the slate-grinding equipment was installed.

One outside away from nasty model-photog event, Mr. Jack Morningwood and myself made like tourists and busied ourselves with a few uninteresting exterior shots.

Here, an exterior shot of the Sand-Lime storage building providing us with the obligatory 'broken glass window' shot.

Presented here for the cartophiles who may be trolling these murky blogs is a map and legend for the industrial pad of the Don Valley Brickworks as extracted from the redevelopment Master Plan prepared for Evergreen by the Planning Alliance. 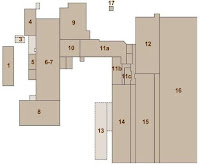 And now . . . A Short History of the Don Valley Brick Works
As extracted from the Master Plan mentioned above

In 1882, 25 year old William Taylor tested clay from digging fence post holes, and by 1889 he and his two brothers opened this brickyard that was to become pre-eminent in Canada. Their Don Valley Brick Works used rock and clay extracted from the quarry and water from Mud Creek to manufacture much of the bricks used to build Toronto. Buildings such as Casa Loma, Massey Hall, the Ontario Legislature, University of Toronto buildings such as Hart House and Convocation Hall and many homes throughout the city, were constructed using bricks from the Don Valley Brick Works.

Above - The Brickworks and quarry circa 1920's. 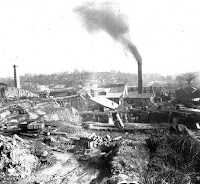 From its beginning in 1889 as a soft-mud brick plant using glacial clays, its managers continuously experimented and improved processing methods here until brick production stopped one hundred years later, in January 1989. The consequence was regular upgrading and replacement of equipment. Successful experiments in 1890 on the use of shale for making pressed brick brought about an immediate major plant expansion and the opening of the shale quarry. Different methods of handling the harder shale and the softer, less consolidated clays and sands, were implemented over the years. Among the various products of the Brick Works were: stiff-mud bricks, dry-press bricks, sand-lime bricks, decorative terracotta tiles and structural pieces. A wide variety was available, ten shades of red, seven shades of buff, plus olive gold, brown obsidian and mottled.
Above - The Brickworks and quarry circa 1890's.
It was the first, and for many years the only plant in Canada, to make glazed (enamelled) bricks and the first to install arch grinding machines to supply brick ground to order for flat, elliptical or circular arches. Their exhibit of pressed brick won the highest award at the World’s Columbian Exposition at Chicago in 1893, and they won two gold medals for their exhibit of brick and terracotta at the Toronto Industrial Fair of l894. This plant produced a wider variety of bricks and kiln fired clay products than any other brick plant in Ontario. Daily production increased from 44,000 bricks in 1891 to 120,000 by 1912. It is of interest to note that the while the buff coloured glacial clays produced yellow bricks, the blue shale produced red bricks. See picture of Brick Works Quarry in 1977 when still in operation.

Gasoline Alley refers to a 2 kilometre stretch of Highway 11 just north of Barrie. This commercial area is so named because of the gasoline (duh). Businesses servicing tourists and travelers were attracted to this area just shortly after Highway 400 was paved in the 1950's increasing the traffic use significantly. A number of businesses located in Barrie and along the older Highway 11 most likely moved here after the Highway 400 conducted their customers past them on a newer faster highway.

A large number of interesting urban exploration 'nooks and crannies' exist within Gasoline Alley as a result of failed businesses. This motel, although somewhat decrepit looking now, most likely offered a clean and affordable overnight accommodations for travelers. It appears that a restaurant may have also been operating .back in the day'.

Another business (possibly a landscaper) now occupies the front restaurant portion of the building and it is obvious that the owner attempted to redevelop the motel portion evidenced by new doorways now joining most the rooms. 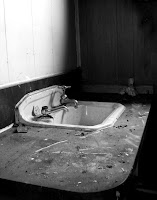 One method an explorer may use to attempt to put a date the building is by having a look at the bathroom fixtures. It is a fairly rare day to find intact fixtures at a location. Either through renovations or the thoughtless inconsiderations of vandals, most fixtures are removed or broken.

Speaking of removed fixtures . . . try to guess that common bathroom fixture is missing from this particular image.
If you guessed 'toilet', you are correct. If the toilet bowl float did not give you a hint, please do not continue reading this blog.

I could not adequately capture this image due to the cramped layout, wet slippery floor, and the occasional mad chipmunk who may have call this motel room home. I did however have to share because peelers float my boat - especially two or three contrasting layers.
Posted by CopySix at 6/07/2007 No comments: