We have yet another post on the history of Barrie, Ontario and if you have a thingy for public infrastructure or more specifically, transportation, then this article may be of interest to you as we will be looking at the history of of the Gray Coach Lines in Barrie.


First up, a backgrounder.  Gray Coach was founded in 1927 by the Toronto Transportation Commission with a number of suburban routes and rapidly expanded outwards from the Greater Toronto Area with several acquisitions.  By 1930, Gray Coach was a leader in Southern Ontario's city-to-city transportation.   In the early days the buses were more of a tall station wagon than what we would recognise as a bus.  The Gray Coach fleet line-up consisted of an evolution of early wagon, to a cab-over-engine design to the iconic Aerocoach design as you may see in these advertisements for Gray Coach from September, 1936 (top) to March, 1948 (bottom) as the bus company moved fleet assets from White Motor Company, Packard, Yellow Coach and Aerocoach.   One can also see the progression here of the popularity in coach travel from the older 12-seaters to a newer more modern design to accommodate 24 or more passengers. 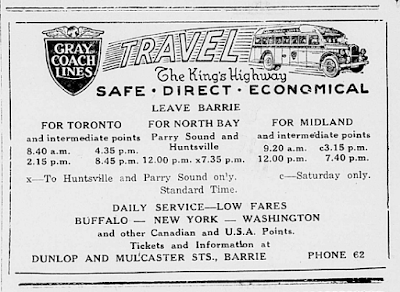 Your keen eyes will likely note that the first older advert places the Gray Coach office at Dunlop and Mulcaster streets (yep - right at the old Clarkson Hotel), while the later advert provides the terminal at #73 Collier Street.

As you have guessed, in the 1930's the bus 'terminal' was just a arrival / departure point at the Clarkson with a small desk just inside where the ticket agent was stationed.  Before the Clarkson, Gray Coach operated from the Wellington Hotel in 1929 until July 1930.  There were no formal agents in the employ of Gray Coach during the early years, but that all changed in August 1942 with a new Agent and a proper modern bus terminal on Collier Street.  The new agent was James Vincent Byrne, or JV as most had called him, and the new location was borne out of necessity, mostly because of the war effort.  Here's an image from the TTC's 1942 'Coupler', one of the oldest (and continuous) internal newsletters in Canada. 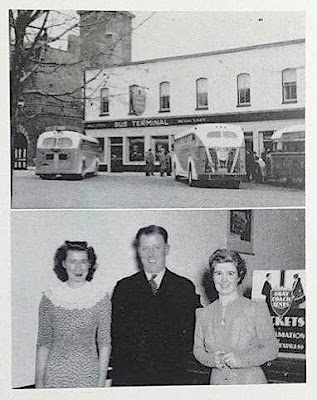 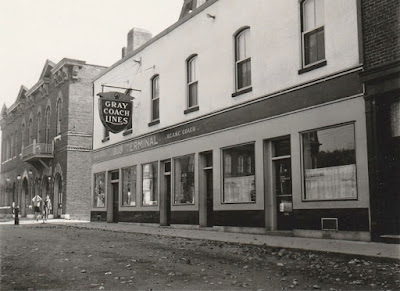 Since 1938, Gray Coach had been providing service to nearby Canadian Forces Base Borden and with the declaration of war in 1939, this service was even more needed.  In May, 1942, Canadian Federal Department of Munitions and Supply and the Town of Barrie granted permit for the construction of the new bus terminal on the site of the former W.F. Stone building on the south side of Collier Street, adjacent to the (old) Fire Hall.  The facilities included a waiting room, ticket / agent office and a lunch bar. 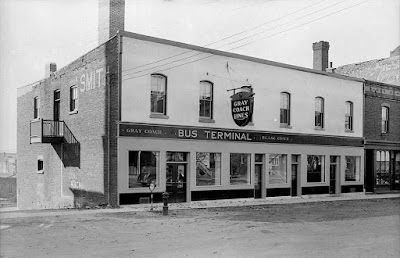 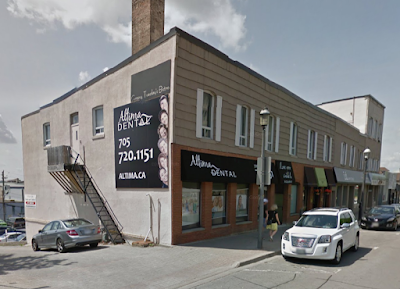 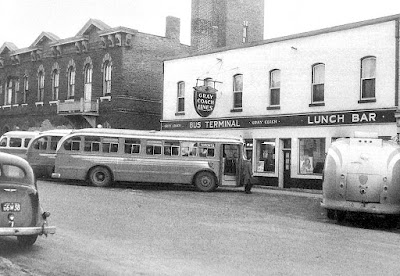 'Before and After' note the old firehall to left of terminal - rather a sad shame that was torn down.  :( 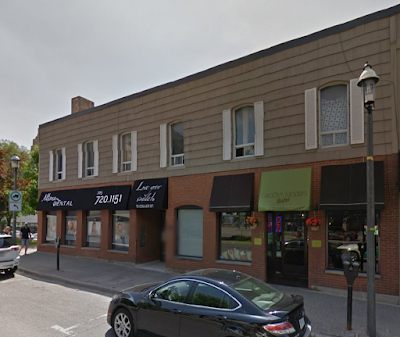 The Gray Coach bus terminal remained at the Collier Street location until September 1956 when it moved to #15 Maple Avenue.  One of the foremost reasons for this was simply the lack of space for all the buses that needed to park at the terminal.  If you had to pick someone up or drop someone off, there was simply no getting close to the front door and you had to try your luck across the street at the garage (where the present City Hall is now). 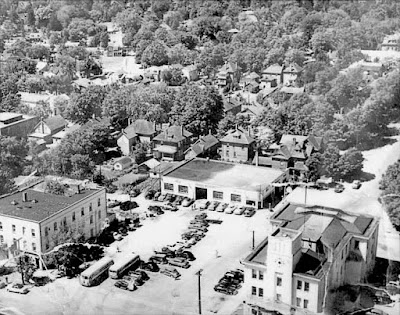 Bottom right of photo is the old Market Hall converted for use as municipal offices. 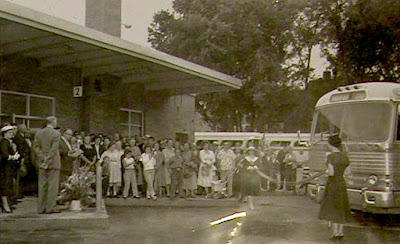 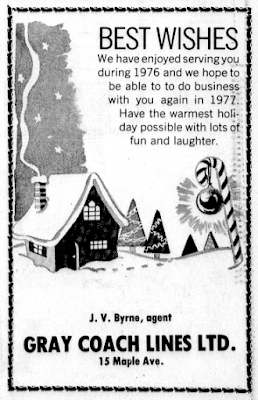 The 15 Maple Avenue terminal was closed, demolished and moved to across the street to 24 Maple Avenue in 1991, where it remains today.  The new terminal houses GO Transit, Greyhound Canada, Ontario Northland and Barrie Transit. 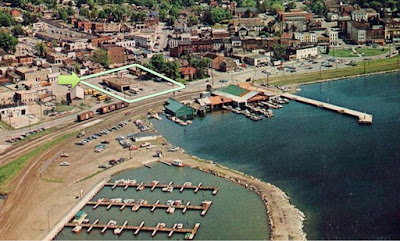 Here is another post for Barrie history buffs.  Specifically, we present two images, taken in approximately 1923-1924 on some street work in downtown Barrie - 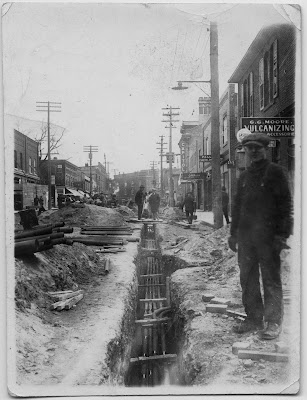 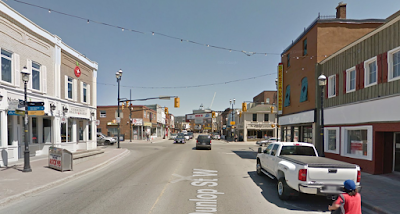 Elizabeth Street (now Dunlop Street West) looking East towards Five-Points. There are still a good number of structures in the older photograph which still stands.  Here is a quick round-up of some businesses visible in the old pic - 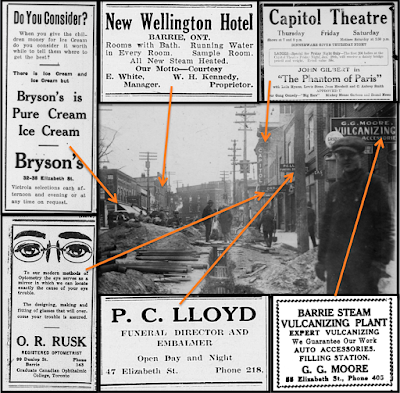 Of note - the Capitol Theatre, which at the time of the photograph is only about a year or two old.  Continuing along the south side of Elizabeth is the optometrist O. R. Rusk (newspaper advertisement clipped from a latter date after the street re-naming), P. C. Lloyd, Funeral Director and then the G. G. Moore Garage (tires, car parts and petroleum fuel).

On the north side of Elizabeth we can see Bryson's Ice Cream shop and then the Wellington Hotel (burnt down - see our post here).  In the far background at the five-points intersection is the Sterling Bank of Canada where Sam the Record Man was last before it too, burnt down.

Here is another image of the pipe laying gang on Bayfield Street looking north to the Simcoe Hotel, also taken during 1923 / 1924 during the pipe laying construction downtown. 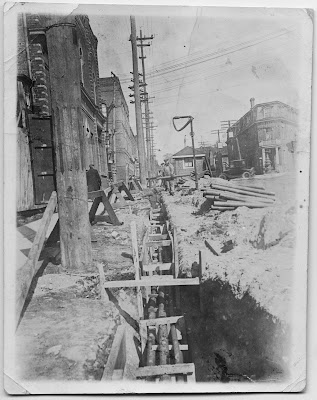 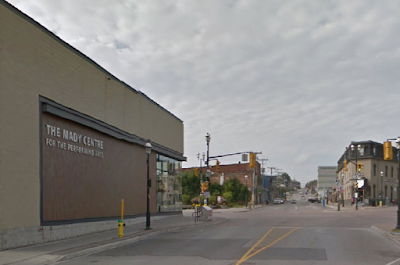 Today's street-scape is nearly unrecognizable with the Maddy Centre occupying the south-west corner but the Simcoe still in its place.

These two old images were purported to be of watermain installation from the waterworks pumping station foremerly located at the base of Mary Street, but we fairly certain these are gas lines instead.  Water mains would have been a single line of 6 to 8 inch ductile or cast iron pipe laid along the street but these smaller diameter pipes are racked up to two racks of four.  One theory is that these pipes may have carried steam, but our best guess is that these were gas lines being installed from the Coal Gasification Plant formerly located on Dunlop Street near Louisa, currently undeveloped due to significant soil contamination, which is still being remediated.  There were two steel holding tanks at this site capable of holding 96,000 cubic feet of coal gas and a railroad spur to deliver the coal. 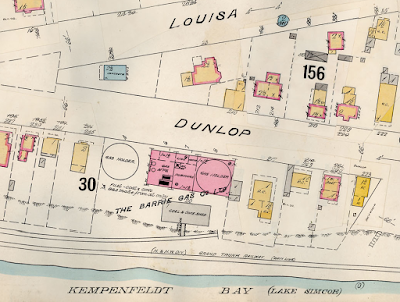 The Barrie Gas Company provided gas for lighting, cooking, heating and power in Barrie, Ontario, between 1878 and 1938.  At the plant, coal was converted to make coal gas, which was piped to customers to burn for illumination, heating, and cooking.  The Barrie gas works operated from about 1878 to about 1939.  The City took over the gas works to make it a public utility approximately 1928.  The main reason for its decline (other than the process being 'messy' and producing hazardous waste) was most consumers favouring electric for lighting and cooking. 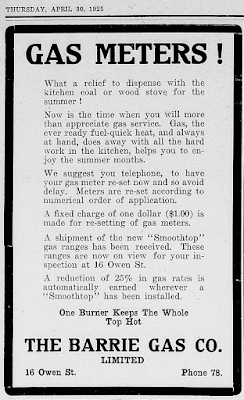