As promised in the previous post (here), this is part 2 of the recent Sundial Inn exploration. 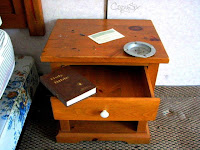 As previously discussed, this exploration was somewhat close to magical given the very pristine shape of the abandonment, the massive volume of equipment / articles left behind, and the absence of any wanton destruction from local vandals (aka a$$-hats).

Here is the second video summarising our exploration . . . enjoy ! 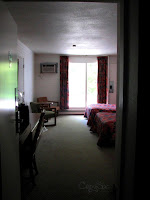 As I had wandered though the hotel (being very careful to leave everything the way I had found it), I did start to think of the number of staff who had toiled here for years on end to keep the place looking good and their guests happy. It was not too difficult to imagine this as a large number of rooms appeared already made with linen / bedding and ready to receive guests. 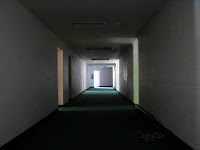 I wondered about the day this place did close . . . how did management inform their staff - was it emotional, did it come as a surprise? I should think that staff would have seen the writing on the wall for some time (and many knew that doors would be closing eventually) - the closing of the kitchens in 2005, no expenditures provided for upgrades or repairs, and finally the long parade of dismal reviews by guests - some of which may be found here.

It must have been as cheery as working at a funeral home or perhaps keeping bar on a sinking ship - taking unending complaints from guests and knowing that the owners in Calagary would do absolutely nothing about it.

From the reviews I had, . . erm . . reviewed, it appears that the pool had also been closed down in the last year or so of the Sundial's operation due to a broken heater, a broken pump, ad nauseum. 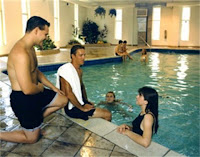 Many poor reviews from guests did arise from the issue around false advertisement - specifically images on the website showing guests enjoying facilities that had since been closed - such as this one to the right.

I rather enjoy empty indoor pools in abandonments - I not sure why. Perhaps it is because these facilities had been witness to so much life before their close . . kids splashing, families playing, etc. And now just a dead husk that presents something almost macabre in its nature. 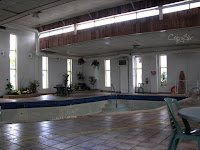 When one explores a pool room in an abandonment, the first thing one may notice is the distressing lack of any water within the pool itself. While I was snapping a few images and taking a some video, I thought about how staff may have drained the pool and perhaps even pulled the pump for a replacement that would never come. To delve further into this, I noticed a narrow stairs which most likely lead to the mechanical room and perhaps the exercise rooms. 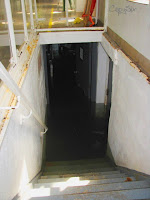 I took only one, perhaps two steps down the stairs when something felt odd - specifically it was the sound of my foot-falls on the stairs. I stopped and then saw that the entire basement was approximately waist deep in water . . . given the brightness of the pool area above, it was not immediately noticeable in the darkness below very still waters.

Just glad I did not get a soaker here.

Until next time, safe and happy exploring everyone !

After the bitter disappointment of being skunked at the two previous hotels (see prior POST), I was left with a deep set yearning to see any hotel - preferably closer to home so it would not hurt too much at the gas pumps. 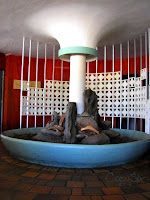 To this end, I headed off to the retrolicous / googie-riffic seat of popluxe luxury, the Sundial Inn. This recently abandoned location was briefly scouted / probed back in February, but not explored . . . Here is PART ONE of this most recent exploration.


Here is a short video of the first leg of the exploration covering the kitchens, bars, restaurant and offices.


First off, I want to thank the gods of UrbEx that be that this location has not attracted the attention of local miscreants / vandals / a$$-hat tag-monkeys. I should think that the fencing erected around the property does provide a level of security to thwart some of these parasites of society. 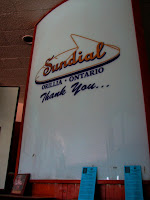 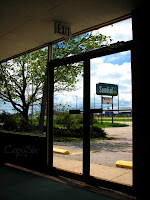 The former hotel appears relatively intact and still fully equipped. With the exception of the collapsed entry canopy (picture below showing the inside view), one could imagine that the place simply closed down for the week and guests would be welcome back at any time.

I especially enjoyed the 'timeless-ness' of this headline from the National Post sport page, "Leafs Eaten Alive" - this could be a headline from any season within the last several decades. 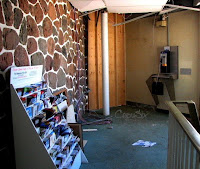 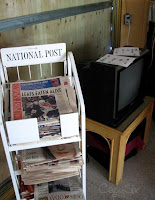 The thing that I love most about this place is the funky decor last updated in the early 80's. There are other decorative elements which had survived since the construction intact . . . finding these, in my opinion are one of the reasons I have a passion for exploration. 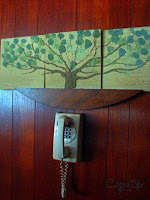 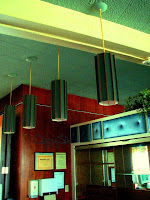 When I carefully picked my way though this abandonment, it took very little imaginative effort to transport myself decades back into time to this hotel's golden age . . . a time when few cared little about about the negative effects of alcohol or deep-fried food. 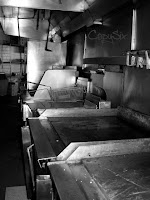 With the exception of any food stocks within the freezer lockers downstairs, the kitchen also appeared ready to be put into action with no great effort. 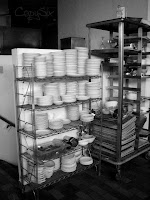 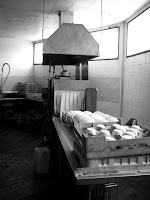 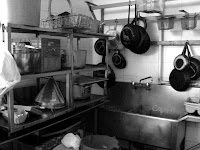 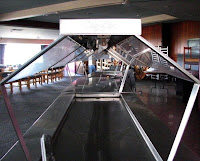 Although the Sunshine cafe closed it's door to guests back in 2005 (a paper found here hints at the date), the hotel still offered conference / meeting rooms - this had left me wondering if the kitchens were still in operation or whether organisers had to cater in the food. 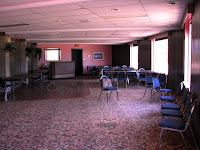 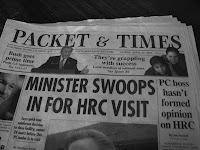 The headline from this April 2005 Orillia paper speaks onto the decision to close the Huronia Regional Centre (HRC), which should be discharging its last patient sometime this year. This is a MASSIVE facility and certainly an UrbEx gem in this region.

Stay tuned for PART 2 of the Sundial Inn exploration within a week or two.

Happy & Safe Exploring,
Remember - I and all who explore with me 'Take ONLY photos, and Leave only footprints' as we respect the properties we visit.
Posted by CopySix at 5/24/2008 5 comments:

The Way is Shut

An explorer can expect with some infrequency that he or she will not be able to gain access to an abandonment. The local lingo for this called 'being skunked'. This does not happen often to an experienced explorer as they would have undoubtedly have 'scouted' the location a few times, softly probing for possible points-of-entry. 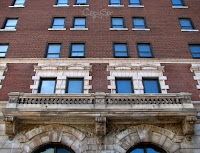 Akin to many non-renewable resources, we have simply explored most (if not all) abandonments locally and must now cast our urban exploration nets further. The drawback to this (in addition to the cost of fuel to travel there), is that one is not afforded the opportunity to properly scout the location and chances of being 'skunked' rise dramatically.

This was the case when we traveled to photographically explore the Royal Connaught in Hamilton and the Regal Constellation on the airport strip in Toronto . . .

The Royal Connaught was a grand hotel in every sense of the word and had been explored numerous times by many explorers. Unfortunately, idiot vandals and tag-monkeys attracted attention of the owners who ensured that the point of access to this beautiful building was secured against entry. 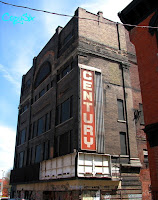 Having driven almost two hours to Hamilton and being denied this UrbEx jewel was very disappointing to say the least. To slake our thirst for exploration, we walked a block or two over to the abandoned Century Theatre which I had already previously explored . . . this too had been most firmly secured against our entry. 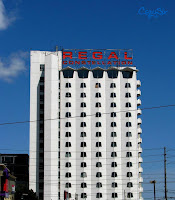 All was not lost however, we still had another chance to explore the retrolicious Regal Constellation on the Dixon Road airport strip. Again, this location had been throughly explored by others and the amazing images posted in their UrbEx galleries only served to deepen our disappointment when we discovered a dozen or two contractors on site active with the process of demolition for the upcoming redevelopment of the property. 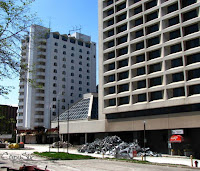 Unfortunately, I am only able to provide you uninteresting exterior photographs of these beautiful buildings. Perhaps latter, if they have not yet been demolished I will be able to treat you to wonderful images of delicious decay and stories of their rich history.