As this blog has been strictly devoted only Urban Exploration items of interest, I have been denied an outlet for my crazy opinions. This will soon change.

Some acquaintances of mine are planning a new community on the web and I have been promised an occasional line or two. To this end, I will give the following plug: Once built and developed, it should provide a unique environment for motorcycle enthusiasts, artists, and opinionated persons like me.


Please watch for the grand openings of
The Machine Garden. 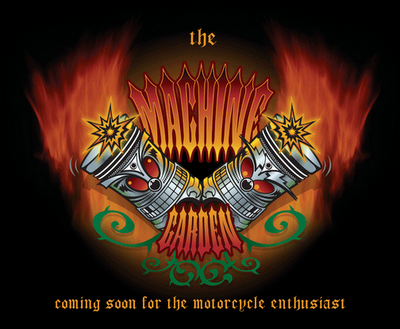 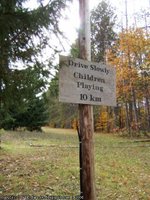 St. Paul’s Evangelical Christian School built a school facility out in Anten Mills but perhaps it was a case of too big, too quick.

A sign on the school grounds.
Warning: 10 KM of slow-moving children. 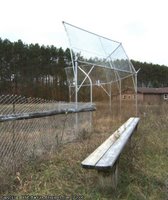 Built sometime in the 1980's, it consisted of five buildings, sited on a large property. The site boasts tennis courts and a baseball diamond.

An empty bench sits adjacent to an empty field. They built it an no-one came.

It is thought that approximately 25 to 30 young Christians students from grades 7 & 8 to 12 attended the school until it closed sometime in the early 1990's.
The layout in the main building suggests that segregation occurred.

The school auctioned most of its assets, including a bus, and moved into a smaller facility (a house) just outside Barrie.

Empty coat hooks in the back hallway wait in vain. 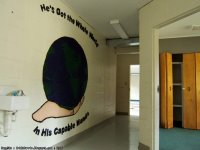 The hand of God appears to be setting up for a bowled strike.
Another Explorer suggested God was using a 'magic 8-ball' to suggest decisions on your destiny. 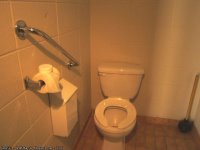 What would an exploration be without the obligatory 'Money-$hot'. The Thomas-J-Crappers in this facility were absolutely pristine and actually stocked with 2-ply bog-roll (perhaps a first in my UrbEx experience). 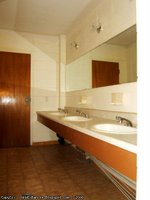 After an inspection of the $hitters, my expectations were high. I was not disapointed. No sinking feelings in the wash-up area. These sinks were clean enough to eat out of . . . so I did.

My own sink at home looks like my cat died in it. I'm now thinking of moving in here.

This is the kitchen area located in Building 'B'.
It appears that several of the physical assets made their way here for the auction that took place.
Most distressing were the ubiquitous postings referencing pest control policies (? !) 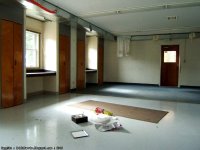 There appeared to be little to no evidence of mis-use by local miscreants.
This class room, however, was tagged by an a$$-hat vandal who apparently had the munchies after smoking up. 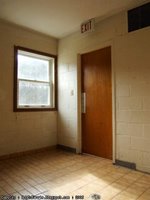 The school grounds now sit unused, abandoned and overgrown. Given the highly secured fenced compound, this location would serve well as a bikers clubhouse.

One of the last images just before I noticed an OPP cruiser doing a slow drive by. I flipped a coin and egressed through the door here.
Posted by CopySix at 10/19/2006 4 comments:

UrbEx Barrie regarded this location with envious eyes and slowly and surely drew their plans for infiltration. With the impending transfer of ownership and prefaced by vacancy, these plans were executed efficiently.
Our agent, CopySix, resplendently attired in hard hat and safety boots comported akin to that of a municipal building inspector went unchallenged by demolition crew workers. The Ghosts who greeted him inside is the focus of this report.

Click any image on this or other pages for a larger size
SEE BELOW FOR A BRIEF (& INTERESTING!) HISTORY OF THE BUILDING 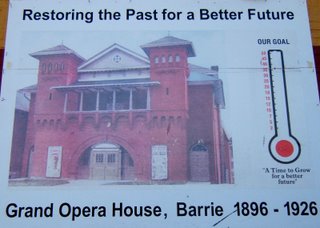 A placard near the front enterance of the former Barrie Grand Opera House.
It appears that an effort was initiated to save the building from the wrecking ball. The structure will be torn down to make way for an office and parking garage.

An artists rendering of the new building. Although the new development does not quite touch on the same property as the Opera House, structural engineers made a case with arguing proximity of foundations. 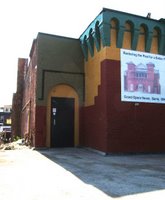 A view from the north-east corner of the Opera House.
The building presents a somewhat disheveled look with the loss of her second floor headdress and the garish rouge applied liberally. 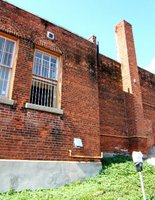 A view of the much contested foundation as seen from the present parking lot to the east. One may see the char-marks left by the fire that consumed the second floor in 1926. 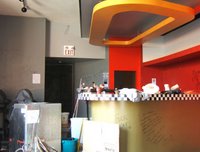 An image of the front foyer. From graffiti left by revelers at the last party, 'Coat Check Kelly' was a much loved individual.
A patio just beyond this foyer sported highly private fencing perhaps to shelter the alternative life-style crowd from prying eyes. 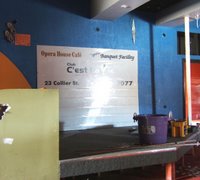 I had learned that the popular 'Rescue Mediums' show hosts had conducted a supernatural investigation the previous week.
As I set up this shot to capture the image of sneakers nailed to the wall, I detected movement through the door (click picture for larger image). I checked - no-one there. 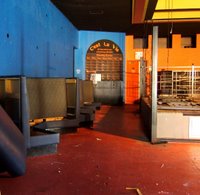 Here is an image of the main bar area.
It looked like a rainbow got sick and threw-up in here.
I loved it!

An elevated dance floor was equipped with railings for the safety of its patrons. (Safety Dance ? !)

An image of the dance floor area. It appears that a work crew were presently active with efforts to salvage anything they could before the wrecking ball.

Here is another image of ethereal interest.
In the back hallway, I captured an odd reflection just within this door way. I attempted to re-create this again without any luck.

I had even tried so far as to leave the camera on timer as I placed myself closer to detect any odd reflection.

In this image, taken down of the hallway running the length of the east side of the building, I captured the most visible apparition yet. This time just appearing to the left of the doorway. From the higher-resolution image, it almost appears to be the top of a lady's parasol. 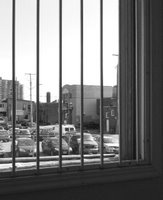 Here is a view of the adjacent parking lot where the planned development will be constructed.
I imagine this image is almost analogous to the caged prisoner on death row and the demolition of the building.

During the exploration of the basement, I had distinctly heard a sound that sounded like a child's voice whispering 'psst' almost beside me. I investigated further and found after a few moments a room where soft drink equipment including a pressurised cylinder of carbon dioxide was housed. The room was far removed from where I heard the sound and the door was closed leading me to doubt that this was the cause of the noice.

History of the Building

From the 40 or so settlers in 1840 struggling in the wilderness of on the edge to Kempenfelt Bay, the Town of Barrie grew by leaps and bounds.
By 1895, the city of Barrie boasted a population of approximately 6000 and was the seat of the County of Simcoe government. The arduous labours of settlement accomplished, the denizens attention turned to social and recreational activity.

In 1896, Buffalo Bill Cody (aka William Fredrick) set up a large tent at the end of Penetang Street and entertained the citizens of Barrie with buffalo, bears, longhorn steers, bucking broncos, Conestoga wagons, real cowboys, and Native American chiefs and warriors. All part of his Wild West Show.

Like most towns entering this particular stage of growth, it also seeked to develop a more cultured and sophisticated side.

Barrie's magnificent Grand Opera House, one of the most impressive theatres in Ontario at its time, opened its doors in 1896, and subsequently played host to such stage attractions as Madame Alberni, the military music of the music band of the Coldstream Guards, and the dancing Hungarian-born Dolly sisters (Rosie & Jenny).

The Grand Opera House (lands and construction costs) was donated to the Town of Barrie by Sydney James (Jim) Sanford, a local entrepreneur with a head for business. Jim became Treasurer of Simoce County in 1885, after his father Sidney M. Sanford passed away (on 12 August) leaving this same position vacant. Sidney was much respected in the community and was the Town's first storekeeper (1832) and first postmaster (1835).

Shortly after the opening of the Grand Opera House, the Town of Barrie discovered itself mysteriously short of two items;

Mr. Jim Sanford, and a wad of County money. An audit of the treasurer's books from the time of Mr. Sanford's appointment until he absconded in 1897, showed the amount of his defaults to be $62, 857.02

With the law on his heels, Mr. Sanford slipped out of the country and sailed to South America. There he built a fortune from mining investments and eventually paid off his debts in full.

The Barrie Exaggerator, erm . . . I mean 'Examiner' commented many years latter, that Mr. Sanford was "both a scoundrel and an honest man".

Although only officially signed that morning at 5:00 AM local time Compiegne, France, then Barrie Mayor Robert J. Sprot proclaimed a holiday. It was a gala occasion long to be remembered. Excited, relieved people filled the streets early, with young people starting impromptu parades, using whatever they could lay their hands on to make noise.

At 9:30 A.M., there was a mass meeting at the Opera House where people of every class and creed assembled to give expression of their joy and thanksgiving.

In the afternoon, a procession, nearly two miles long, with every vehicle decorated with flags and bunting, wended its way from the Town Hall, around town and back to the Market Square, where the band led the people in singing patriotic songs, such as "Rule, Brittania", "Red, White and Blue", "The Maple Leaf" , and "O, Canada".

A conflagration consumed the Grand Opera House in 1926. Reconstruction began soon afterwards, built only confined itself to the main floor. I blame this on prohibition at the time.

Without the spacious second floor, the movie theatre did not reopen. The building passed onto various owners and was occupied by a variety of businesses. It was lastly Club C'est La Vie, Barrie's only alternative-lifestyle club and home to Miss Cali's Dungeon for the S&M crowd in the basement.

The City issued owner Cark Hauck an expropriation notice on March 30, 2006. Some people rumoured that the mayor (somewhat conservative and also an owner of several nearby bars) won't be sad to see any competition leave. Collier Street Development Corporation (Parallax Investment Group) is planning a $6.8-million parking garage, which will feature 30,000 square feet of prestige office space, all part of a downtown revitalisation project.