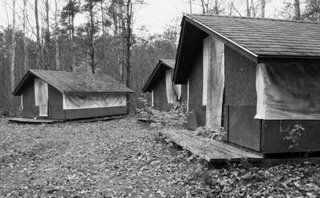 Here is the Scout Stalag, er . . I mean Oba-Sa-Teeka Scout Reserve, located in Essa Township. This facility operated as a Scouting Camp from about 1965 and closed in 2004.


There were 25 separate capsites located on 215 acres of land. Camp Oba-Sa-Teeka featured an Obstacle Course and an Olympic-sized pool. One of the highlights of the camp was the Railway Caboose, which has three authentic railway cars - two for sleeping, one for dining, which was moved to another scout camp when Oba-Sa-Teeka closed.

The property now is owned and operated as the Ontario Vipassana Centre which offers a venue and instruction in in this branch of Buddhist Meditation. 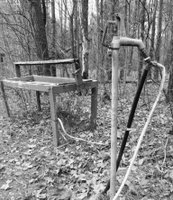 Scouts Canada sold 14 camps in Ontario after a two-year review which reviewed all camps against 11 criteria. General opinion indicates that low enrollment (membership now half of the 1970's level), coupled with required upgrades to provide potable water in a post-Walkerton environment sounded the death-knell for many of these camps.

The property had 3 'villages' named after indigenous aboriginal tibes. The Huron, Iroquois, and Cree villages consisted of small bunkhouses, and a covered dining shelter. Certainly an upgrade to camping in a field.

Campers often registered their troop names and the year of visit to available surfaces of these structure. One may be able to track the same troop's visit over the years to the site. 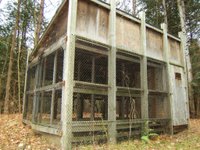 This is 'The Pen' where unruly Scouts were caged in . . . Or perhaps just an equipment lock-up.

Most of the obstacle course's structures are well on its way to become compost. 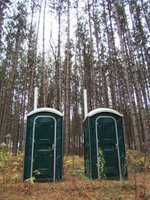 Not quite the 'de rigeur' Urb Ex Money $hot, many of our regular readers have come to enjoy, but we were in a bit of a bind here.
After feasting on dry cereal and under-cooked hot dogs in stale buns, the campers were afforded the luxury of a seated commode.
Posted by CopySix at 11/06/2006