Yes, I know. This blog specialises in central Ontario abandonments (read: Barrie and area), but this exploration was just too lovely not to pass along to our loyal blog readers.

This installment will be part one of a two part installment of a recent trip to Hamilton, where one may find numerous buildings of architectural significance. Today's post will cover a trip to the former Lyric Theatre in downtown Hamilton. Guide services provided by adept local explorers HairyTheTaco and Roygbiv.
Lyric Theatre Vital Stats:
Opened - 1913
Renovated - 1940 and 1967
Closed - 1989

Image of the Lyric in 1913 prior to the renovations / addition.
Image Credit: The Hamilton Spectator

Fabric Stage Curtain. I'm somewhat mildly surprised that the hobos have not yet utilised this for tenting or bedding material. 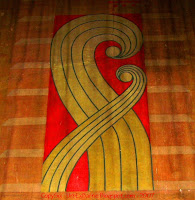 Beautiful Art Deco volute dating to the 1940's may still be found on the theatre's walls. 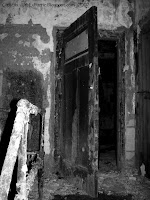 Hardhat on a knob - just like my supervisor.
Not much reno-work has taken place yet. 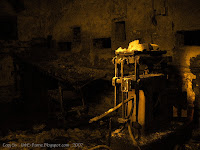 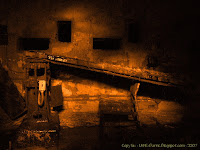 Another shot of the projectionist's booth.

Next to the projectionist booth, this closet still contained lint-free lens wipes nearly 20 years after the last film.

If I had to guess . . . Hobo with a foot fetish did some dumpster diving, took this date to the movies and promptly wrecked them.

Front staircase leading further up. Unfortunately, the structural integrity was questionable at the least. After hearing Roygbiv's account of almost being 'de-nutted' through the floor, we decided against this route.

Front office featuring a masonry hearth. Obviously this was the Theatre Manager's office where he/she would 'fire' reprobate employees. 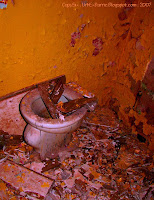 Onto the basement and the greatly anticipated 'Money $hot' all our fans have come to expect.
This Thomas J. Cr@pper was noticeably smaller than its modern counterpart. Collectively, have we really bloated that much in 40 years?

Also in the basement was this lovely urinal.
The shocking canary-yellow choice of wall colour and uncomfortable proximity to the next pissoir is highly questionable.

This sturdy basement door is a portal to HELL ! . . . erm, I mean the boiler room. 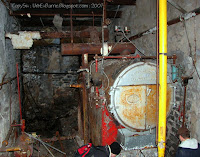 Here, HairyTheTaco and Roygbiv are seen checking out the monstrous boiler. Built by the Waterous Engine Works, of Brantford, this bad boy provided heat to the entire building. Evidence of a coal shoot and bin suggest an earlier (duh) coal-fired boiler. 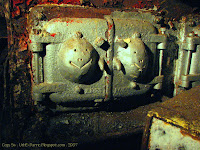 Detail of the ornamental doors on the boiler's fire box.
They certainly don't build them like this anymore. 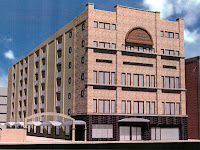 The new owners of the former Century Theatre intend to convert it into condos on the upper floors with commercial space on the ground floor, retaining as many of the original features on the Mary Street facade as possible. One possible look is presented here.

HISTORY
Opened as a vaudeville theatre in 1913, the Lyric Theatre was hailed at the time to be the largest theatre in Hamilton with a seating capacity of over 2000. It was built for Dominion Theatres Limited to offer Loews Vaudeville and moving pictures to the citizens of Hamilton. At a time when this form of entertainment was extremely popular, the Lyric Theatre was one of the seven largest and grandest theatres of its type to be built in Hamilton, three of which were located in the immediate vicinity: the Temple, the Capitol and the Palace. In 1914, the Lyric was sold to the Canadian United Theatre Company of London, Ontario, and became the Keith Vaudeville Circuit spermanent home in Hamilton. The theatre underwent extensive renovations in 1922,making it one of the most palatial amusement centres in the Dominion.

Purchased in 1940 by Century Theatres it was fully modernized to serve as a state-of-the-art movie house. In 1967, the Century underwent yet another complete refurbishing andcontinued to operate until closing in 1989 when the new multi-theatre complex opened in Jackson Square. Today, the Century and the Tivoli on James Street North are the only two of Hamiltons grand early century theatres to survive with their auditoriums. It might also be noted that both the Century and Tivoli are victims of the opening of the theatres at Jackson Square (its opening resulted in their closings). The theatre at Jackson Square has since been sold by Famous Players to Empire Cinemas.

ARCHITECTURE
The Lyric Theatre was originally built with a four storey wrap-around brick masonry facade designed in a Renaissance Revival style. It featured six pilasters with cast stone capitals supporting a cast stone moulding that was originally surmounted by an elaborate crowning cornice (almost certainly fabricated of galvanized iron) with a central round arched section framing a semi-circular metal sign panel. The symmetrical front facade was divided by four brick pilasters into three window bays. The wood-framed sash windows originally provided natural light for the offices located on the three floors at the front of the building.

In 1922, the building was extensively remodeled with an elaborate new entrance,modern balcony and beautiful mezzanine floor. In 1940, the building underwent more major changes, which most likely included the fifth floor addition at the front. The architects Kaplan and Sprachman of Toronto reputedly designed many outstanding picture houses across Canada. Claimed to be the first theatre in Canada to have the modern convenience of year-round air conditioning, it was decorated with sensational new fluorescent carpet never before seen in Canadian theatres. Fluorescent paint was applied to the ceiling and wall panels in modernistic designs and illuminated with black lighting. The entrance was again altered to include a new marquee, stainless steel box office, vitrolite cladding and neon lighting. Many of these elements were lost when the theatre was again renovated in 1967. The only decorative feature of the 1940 interior to survive was a series of identical abstract Art Deco panels painted on the side walls of the auditorium, which are now faded but still visible (see my photograph above).

Today, the upper facade retains its original brick masonry facing and cast-stone trim and its original window openings with some of the wood sash windows (now hidden behind metal cladding) and cast-stone lintels. Although the decorative cornice has been removed, the painted metal Lyric Theatre sign has survived, now badly faded but with the lettering still just discernible. The only surviving original feature of the street level facades is the cast stone lower cornice which wraps around the sides of the building where it is still visible and partially intact. The front section may be intact (or partially) behind the aluminum fascia panel.

Even in its neglected condition, the former Lyric/Century Theatre continues to stand as a significant example of Hamilton's early century theatre architecture. Designated features important to the preservation of the former Lyric/Century Theatre is the West (front) facade and the sections of the North and South walls which echo the architectural treatment of the front facade. Included are the six brick pilasters, the caststone capitals, sills, upper string concourse, surviving sections of the lower cornice, the semi-circular metal sign panel, the original window openings and any surviving woodsash windows. Also included are the 1940 painted panels in the auditorium.
Posted by CopySix at 3/12/2007

Unfortunately, the City of Hamilton has neglected/forgotten this beautiful building for years, and today, January 8, 2010, we learn that it may be unstable and might even have to be torn down. I used to walk past it on my way to work each day, and always wondered why something wasn't done with it, and why such a fuss was made of restoring the Tivoli Theatre which, in my humble opinion, wasn't nearly as lovely and historic as the Century. I went to both in my youth and the Tivoli had nothing over the Century. Maybe because the Tivoli was on a main street and very visible, whereas the Century was just off the main street. What a shame to lose this (formerly) beautiful old building.

Actually Norma you didn't mention that the reason that the Century has become unstable is because the top two floors have collapsed. There are major foundation cracks as a result.

What a terrible shame.

just wanted to let you all know, i live around the corner from this building, on my way to the gym yesterday, the 26th of january. it was being torn down. i do have pictures and a video as well. I also was able to get some bricks from a demolition worker.

Im assuming the person who bought the building didn't take care of it. so it was demolition by neglect.

Really sad, and dissapointing. I used to take friend to see this building. A friend of mine was quite fond of it. I called her as i was standing outside of it yesterday to let her know , that it was gone. ..I walked by it again today. and what was left stading yesterday..is now a giant pile of bricks. I thought they weren't able to build over top of it? for historical reasons.

like i said, i do have pictures.
email me m_bates00@Hotmail.com

It is nice to see that some folks make an effort to retain as much as possible, and where possible with respect to a historical building such as this.