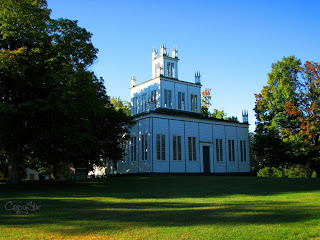 Yearning for the return of warmer weather and the return of summer, I had looked through a few images I had taken during greener times.

Presented here is a brief stop I made at Sharon Temple.


Sharon is located in East Gwillimbury, approximately 15 kilometres east of Bradford. I had made this a quick side-trip on my way to the Kennedy Detention Centre in Uxbridge. As I had pulled up into the visitor parking lot, the temple and its surrounding grounds almost had a sort of fantastical feel to them. 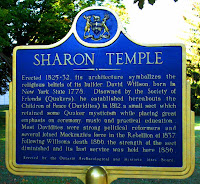 The Temple of the Children of Peace is located in the village of Sharon, Ontario. The Temple was constructed between 1825 and 1831 by a schismatic Quaker sect led by David Willson on whose property it was built. It is a square building with two upper levels of proportionally decreasing size that gives it a wedding cake look.

The Temple architecturally represents their vision of a society based on the values of peace, equality, and social justice. It is reported that the Temple was modeled after Solomon's Temple. In addition to being a place of worship, the structure was also used once a month to collect alms for the poor. 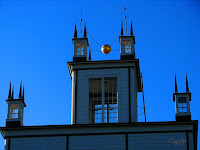 When construction of the Temple was completed, eight girls were given the task of raising that mysterious golden orb to the top of the roof.


My imagination runs wild speculating what might be inside this thing . . .

The structure, which is constructed almost entirely of wood is in very decent shape. I will assume that the labour and cost of maintenance of this building would be no small thing. 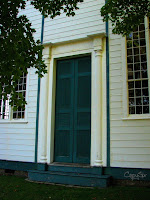 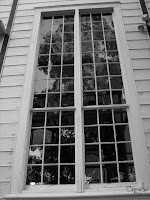 The last service was held in the Temple in 1889. The temple has been restored and is now a National Historic Site and museum as well as a National Peace Site. 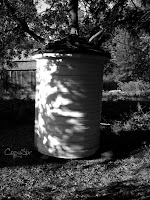 During my tour of the grounds, which also includes some outer buildings, I spotted this most interesting and unique structure.

I do not remember ever seeing a round out-house before. I do have a lot of inappropriate humour to share with you about out-houses but perhaps I will leave that for the Urban Exploration forums . . .

One morning in October, 2007, John McIntyre, the curator of the Sharon Temple Museum, arrived at the Temple, and was surprised by the sight of the town's Mayor wearing a helmet, safety goggles and wielding a chainsaw.

Marlene Johnston, a town Councillor, handed Mr. McIntyre a can of orange spray paint and asked him to mark trees that could be felled to maintain the greenery between the 175-year-old museum and the civic centre which is on the adjacent property north of the Temple. Mr. McIntyre tagged six trees and left.

When Mr. McIntyre returned a few days later, the town's crew had cleared a large swath of 83 trees, including 15 evergreens that were planted more than 75 years ago.

To say that the incident enraged the museum's board is a bit of an understatement. The Mayor apologised, calling the incident an accident, but the town council launched an inquiry.

The inquiry reported back to council that it could cost as much as $70,000 to replant the trees which were cut down. In a written statement by Licinio Miguelo, a spokesman for the Town, council stated that "Because the tree removal from the heritage site was not authorized by council, costs related to this incident will not be borne by the taxpayer." . . . OUCH !

The province's heritage agency has a conservation easement that protects the site and any change to the property must be approved by the Ontario Heritage Trust.

Why Urban Explorers Are Intrigued
Its a long and winding path through this thought and to my point, so just sit back and relax . . . 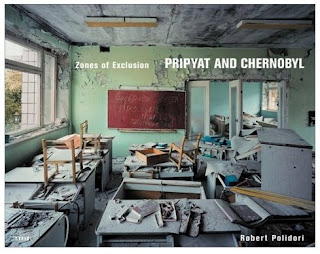 For Christmas, my most excellent brother 'DressyMonday' gave to me the book, 'Zones of Exclusion: Pripyat and Chernobyl', by Robert Polidori.


This book, which is a photographic exploration shot over 3 days, presents an unexpected look at what remains of Chernobyl and the town of Pripyat, Russia, the site of the worst nuclear disaster to date. 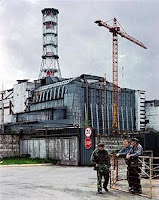 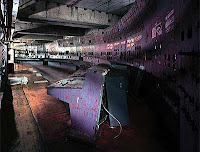 Guards in Front of the Unit 4 sarcophagus

Unit 4 Control Room
(From the Amazon book summary) In the 11 days following the Chernobyl catastrophe on April 26, 1986, more than 116,000 people were permanently evacuated from the area surrounding the nuclear power plant. Within 15 years after the event, the evacuation toll rose to 350,000 people. 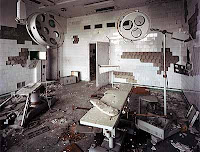 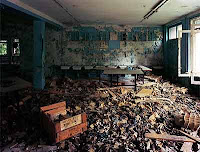 Operating Room in Hospital #126, Pripyat.
Cafeteria in School #5, Pripyat.
Declared unfit for human habitation, the "Zones of Exclusion" includes the towns of Pripyat (established in the 1970s to house workers) — and Chernobyl.

In May 2001, Robert Polidori photographed what was left behind in this dead zone. His richly detailed images move from the burned-out control room of Reactor 4 — where technicians staged the experiment that caused the disaster — to the unfinished apartment complexes, ransacked schools and abandoned nurseries that remain as evidence of all those people who once called Pripyat home. 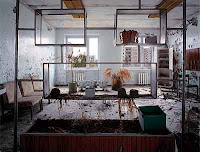 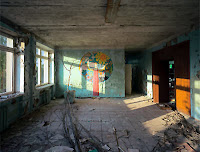 Hallway in School #5, Pripyat.
Nearby, trucks and tanks used in the clean up efforts rest in a car graveyard. Some are covered in lead shrouds — and others have been robbed of parts. Houseboats and barges rust in the contaminated waters of the Pripyat River. Foliage grows over the sidewalks — and hides the modest homes of Chernobyl.

Recently, on one of the Urban Exploration forums, fellow explorer, Mark Vicious, had gave a heads-up to the community about a History Channel special dealing with the very same subject. This two-hour show will air on the History Channel on January 21st, examines the remnant vestiges of depopulated areas. The trailer, shown below, has really whetted my UrbEx appetite.

LIFE AFTER PEOPLE - History Channel
Explore the tantalizing question of whether all the remnants of mankind will eventually disappear from our planet. What would happen to the earth if humans ceased to exist? Would ocean life flourish, the buffalo return to the Great Plains and our skyscrapers yield to the wear and tear of time. Visit the ghostly villages surrounding Chernobyl, which were abandoned by humans after the nuclear disaster in 1986 and then travel to the remote islands off the coast of Maine to search for traces of abandoned towns that have vanished from view in only a few decades. Learn from experts in the fields of engineering, botany, ecology, biology, geology, climatology and archeology as they provide answers for many thought provoking questions. 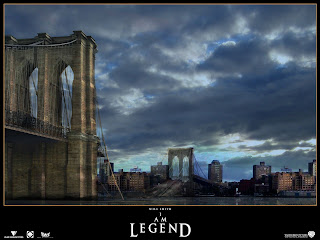 Along the very same lines dealing with depopulated urban areas was the 1954 science fiction novel by Richard Matheson, "I Am Legend" about the last man alive in a future Los Angeles overrun with vampires. The novel was a success, and was adapted to film as The Last Man on Earth in 1964, as The Omega Man in 1971, and again in 2007 as I Am Legend, starring Will Smith. 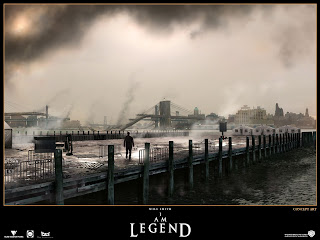 In the 2007 movie, released released to movie goers just before Christmas, Hollywood has decided to show the decay and death of a post-cataclysmic Manhattan. Although I did not yet take in the movie, the cg special effects in the trailers do a good job at showing how an urban evironment may look with absence of people and the resultant breakdown of the physical infrastructure.

Also released in 2007, was the book, 'The World Without Us', by Alan Weisman. In this book, the author offers an utterly original approach to questions of humanity's impact on the planet: he asks us to envision our Earth, without us. 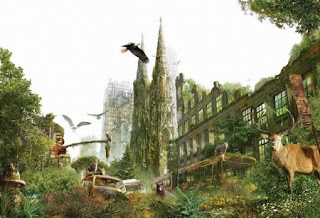 According to Weisman, large parts of our physical infrastructure would begin to crumble almost immediately. Without street cleaners and road crews, our grand boulevards and superhighways would start to crack and buckle in a matter of months. Over the following decades many houses and office buildings would collapse, but some ordinary items would resist decay for an extraordinarily long time. Stainless-steel pots, for example, could last for millennia, especially if they were buried in the weed-covered mounds that used to be our kitchens. And certain common plastics might remain intact for hundreds of thousands of years; they would not break down until microbes evolved the ability to consume them.
Be sure to take the multimedia tour and see the visual time line.

I remember reading the book 'Z for Zachariah', by Robert C. O'Brien when I was in grade 7. This is a gripping story about the survivors of a nuclear holocaust and perhaps planted a seed which would eventually germinate into my interest and fascination for urban exploration and abandonments in general.

The book was published posthumously in 1975 and is written from the first person perspective of a sixteen-year-old girl named Ann Burden, who survives a nuclear war in a small American town. The town's location in a geographically distinct and remote valley shelters it from the nuclear fallout. The book takes the form of a diary kept by Ann Burden as she recounts the events that followed the war.

So, given the large number of books and films referenced above as well as my Google Notebook, the question is posed; Why are we so fascinated by this disturbing subject ?

I did rack my brains for a while on this and then stumbled-upon a post by 'MonkeyinaBall' in an unrelated forum dealing with zombies of all things.

In it, MonkeyinaBall writes (with some paraphrasing),
"I'm fascinated simply because of the survival aspect. It is the ultimate test of your moral values, your intelligence, your strength - everything that makes a person strong. It would bring out the best (or worst) in everybody. Everyday would be spent living in the moment, fighting and struggling to survive, it would be the ultimate way to test your limits and find out what you are made of. Also, on a side note, it would also mean life without society's rules and restrictions."

This may be part of the equation for many explorers, including myself perhaps on a subconscious level. Personally for me, a large part of the fascination comes from my love of history. For me, an abandonment is a physical and tactile link with the past. I imagine the structure as a sort of battery, containing the memories of occupants. As nature corrodes this vessel, these memories are slowly and irretrievably lost.
For me, urban exploration is a race against nature and time.