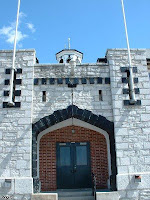 Here is a picture I took in 2004 showing the impressive front entrance.

The Barrie Jail was a maximum security correctional facility providing short term, secure custody for persons awaiting trial or sentencing, those being held for immigration hearings or deportation, those serving short sentences (under 90 days) and those awaiting transfer to other Ontario correctional institutions or to federal institutions.


The Barrie Jail was oringally designed to accommodate 32 men. Two subsequent additions have increased the numbers up to 82 men. More recently, before its closure, a typical day it would witness an accommodation close to 100 men, plus women. In the old part of the jail there was no light in the cells and no toilet facilities; they have to use a pail under the cot. 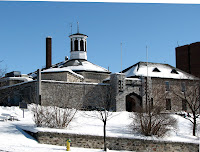 A more recent photo I took in February, 2007. Work crews had demolished the temporary holding addition the previous year.

Construction began in 1840 to serve Barrie and area as a goal. Improvements ordered after inspection of the provincial board of Prison inspectors in 1860 - Observation tower also torn down at this time. Jailers residence built 1902. The Province of Ontario took over operations in 1968.

The facility transferred its last prisoners to the massive Central North Correctional Centre in Penetanguishene, and shut its doors in the fall of 2001.
Thomas Young (c.1810-1860) of Toronto designed three Radial gaols between 1839-41. The Goderich (Huron District Jail) gaol is maintained as a wonderful museum, and the Guelph goal was demolished in 1911. The Barrie gaol, like its historic Allandale train station, stands abandoned and in ill repair. 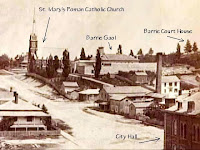 The image to the right was taken sometime in the early 1900's (most likely from the now demolished fire hall tower), we can clearly see the Barrie Jail sharing the skyline with St. Mary’s Roman Catholic church. This church was built in 1872 and demolished in 1968.

A side note about Barrie's dark history:

On the evening of 10 June, 1926, Barrie residents were shaken by the sound of a large explosion. Residents looked out their window to determine the cause. Without finding any, all retired and it was not until the next morning, was it determined. A stick of dynamite had been placed against a brick wall of the church and a four-foot square hole blasted through it. William Skelly, a 30-year-old shoemaker and Ku Klux Klan member, was arrested in Toronto soon after the explosion.

The Ku Klux Klan was active in Ontario from 1923-27. The Klan organised a major gathering on a hill just outside of Barrie on the night of 23 May 1926. The rally had originally been scheduled for a city park but when public officials realised it was a Klan gathering, permission was canceled and the venue shifted. A crowd estimated at 2,000 (a large number drawn from across the province) watched as the ritual cross was burned. 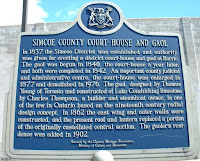 Simcoe County Court-House and Gaol
Location: Up on the hill on Mulcaster Street across from McDonald Street downtown Barrie.

Text from the Plaque:
In 1837 the Simcoe District was established and authority was given for erecting a district court-house and gaol at Barrie. The gaol was begun in 1840, the court-house a year later, and both were completed in 1842. An important county judicial and administrative center, the court-house was enlarged in 1877 and demolished in 1976. The gaol, designed by Thomas Young of Toronto and constructed of Lake Couchiching limestone by Charles Thompson, a builder and steamboat owner, is one of the few in Ontario based on the nineteenth century radial design concept. In 1862 the east wing and outer walls were constructed, and the present roof and lantern replaced a portion of the originally castellated central section. The gaoler's residence was added in 1902.
I have borrowed the following brief article which summarises very well the social attitudes and reformation of penal incarceration. 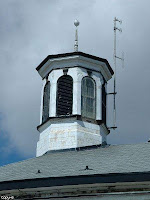 Another photo I took in 2005 showing the unique tower-like roof structure.

The three gaols share a basically octagonal design – the only ones in Ontario ever to have such an eight-sided footprint. They share also a massiveness of architectural conception and construction, all being built mainly of locally quarried stone blocks typically two feet thick. Like castles and cathedrals, they were built to last. 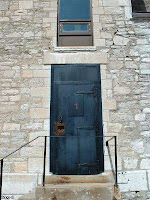 The side door of the jail, taken in 2005 showing the heavy steel construction.

Thomas Young brought with him from England experience of penal structures which had grown from ideas generated from John Howard’s investigations into English and Welsh prisons. In particular, Young brought the dominant model for English gaol/prison architecture in the early nineteenth century – the Radial Prison. 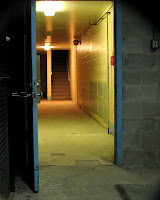 A recent 2007 photo I took showing a hallway on the north side of the building's interior. 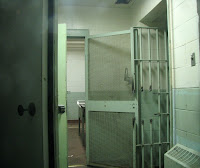 Another 2007 photo I took showing the hall leading to the kitchens.
They are also intended to promote, through providing a controlled, peaceful, regulated environment, the moral reform of the inmates. The gaols, and their associated courthouses, testify to important aspects of civil society in Upper Canada. 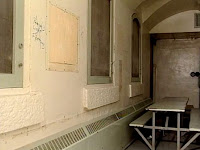 Crucial is an emphasis on local, manageable municipal districts, the central role of the regular administration of justice and civic government, and, literally, the grandeur and magnificence of public governance, which is to be supported and displayed through majestic public buildings placed in prestigious and prominent locations. 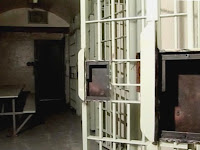 The gaol in Barrie – which surely has one of the prime downtown locations in the city – continues as a monument to the civic heritage – and to the forward looking magistrates – of Barrie, Simcoe County, and Upper Canada. It deserves to be able to continue in active use as a significant public building. 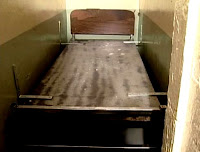 In 1976, capital punishment was removed from the Canadian Criminal Code. It was replaced with a mandatory life sentence without possibility of parole for 25 years for all first-degree murders. The bill was passed by a free vote in the House of Commons.


In 1998, the Canadian National Defense Act was changed to remove the death penalty and replace it with life imprisonment with no eligibility for parole before 25 years. This brought Canadian military law in line with civil law in Canada. 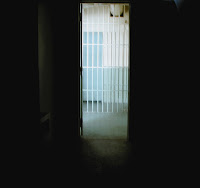 A 2007 photo I took showing the front entry hall area.